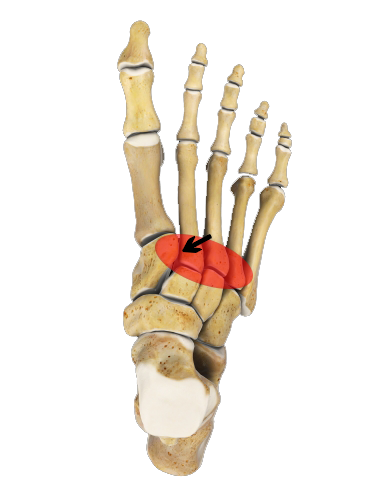 A fracture or break to the midfoot, also known as a Lisfranc fracture, is a significant injury often resulting in an extended recovery time. It is important that midfoot fractures are immediately diagnosed and properly treated to receive the best outcome possible. Early treatment can greatly increase your chances of avoiding surgery or permanent damage to your foot.

Injuries can occur through the midfoot region that can cause ligament failure (Lisfranc’s ligament rupture) and/or fractures to the middle portion of the foot (also called Lisfranc fractures). This type of injury is often the result of a significant force that passes through the midfoot such as a twisting injury to the midfoot, auto accident or, when a heavy object falls on the top of your foot. Lisfranc fractures are named after the French physician who first described them. They are commonly missed on initial x-rays or misdiagnosed as an ankle sprain.

Intense pain, swelling and bruising in the midfoot region are common immediately after a midfoot injury. Some patients report hearing a popping or cracking sound at the time of the break. Other symptom of a Lisfranc fracture can include pain, bruising and swelling to the middle portion of the foot. While some patients are unable to bear weight on the injured foot due to pain and swelling, we often see some walking in the office with a fractured foot.

Sprains and fractures of the midfoot present similar symptoms. However, with a fracture you can often pinpoint the area of tenderness or pain, whereas the achiness related to a sprain a affects a wider area of the foot.

What Causes a Lisfranc Fracture?

Lisfranc injuries are often the result of excessive force to the midfoot or a forceful movement when part of the foot is stabilized. Examples include an injury to the foot while horseback riding, with the front part of the foot locked-in to the stirrup, slamming on the car brake pedal just prior to a head on collision, a fall from a significant height or a heavy object falling onto the foot.

Lisfranc fractures can be subtle and are often missed on initial x-rays; therefore, they are one of the most commonly misdiagnosed injuries we see coming from local area urgent care or emergency room facilities.

Early diagnosis and proper treatment of Lisfranc injuries are critical. Complications of an untreated midfoot fracture include:

If there is minimal displacement of the fractures and the Lisfranc’s ligament is still intact, the injury may be treated conservatively with 6-8 weeks of immobilization with either a short let cast or fracture boot. After this period of immobilization, you may need extra support in your shoes with either a custom or over-the-counter arch support. Physical therapy will help strengthen the area and aid in the restoration of full range of motion.

Surgery is often required when the bones are not aligned to prevent long term issues such as post-traumatic arthritis. If there is ligament involvement and/or significant injury resulting in displaced fractures or acute instability, surgery may be necessary to help realign the bones, restore the ligament, and in some extreme cases even fuse some of the joints to help re-establish stability to the area.