Case 8: Hello Hybrid Total Ankle - Letting go of the past and embracing the 3D printed future

Though no one can go back and make a brand-new start, anyone can start from now and makde a brand-new ending. ~Carl Bard

Currently, no one can argue that the Depuy Agility Total Ankle System is a dinosaur in terms of total ankle technology. On the other hand, one must recognize that it has played a significant role in setting the stage and blazing the pathway for the design and introduction of so many new and greatly improved total ankle options that are available today.

At one point in the recent past, the Agility was the only option available by a select group of accomplished foot and ankle surgeons. Now, it is no longer available and finding replacement parts for it is extremely difficult.

A couple of years ago, a patient walked (limped) into my office with a dilemma. She had a very well-done Agility (1st generation) total ankle that was put in by the great Dr. Sig Hansen over 24 years ago. To date, she has had over 10 ankle surgeries including 2 revisions where exuberant bone formation was removed and the poly was exchanged, with the most recent one being about 10 years ago.

Here she was in my office for another “tune-up” surgery, but the only problem with this was that her ankle system was discontinued and was no longer supported. While I was able to track down a spare Agility poly after about 10 phone calls and a rather extensive treasure hunt at the DePuy/Synthes warehouse somewhere in Warsaw, Indiana, I saw a big dilemma that needed to be addressed. What will happen in 10 more years when this poly wears out and there are no replacements available that haven’t expired while sitting on a shelf in a warehouse full of retired parts? 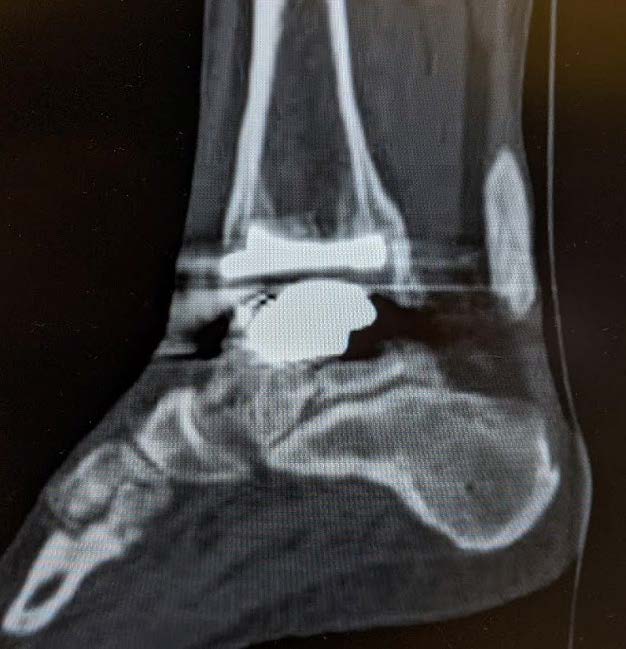 The key question was whether or not to refresh the aging Agility with another spare part with such a short shelf life. To complicate things further, the patient, who had been diagnosed with Diabetes (after her first surgery) will be 10 years older and presumably less healthy than she is today when she would need her next poly swap. We spoke in great detail about the law of diminishing returns with her current ankle system, especially with multiple past surgeries that no doubt have impacted her blood supply and bone stock and have left her ankle riddled with scar tissue.

After a CT scan demonstrated a talar fracture under the Agility talar component, I presented the idea of swapping out her old technology with a much more future proof system and the possibility of utilizing 3D printing to fully reconstruct her talus, which was starting to show signs of cracking under the pressure of a talar component that didn’t span to the vertical edges of the talus where the foundation is the strongest. Quite frankly, I am surprised that her talus lasted as long as it did.

In order to “upgrade and future-proof” her ankle, and to address the huge bone deficit left after removing the behemoth Agility, I opted for a Wright Medical Prophecy Invision tibial component with corresponding bearing and a 3D printed total talar replacement.

Wright Medical Prophecy Invision tibial plan on the left. Restor3D total talus design with a superior surface adaptation to articulate withe the undersurface of the Wright Medical suggested bearing based on the Prophecy planning.

The surgery was completed without a tourniquet to reduce pain, swelling, and chance of a postoperative hematoma. Rebar plating was placed over the medial and lateral malleolus (to address a small crack in the fibula that occurred during the Agility tibial tray extraction.

Agility imprint before (left) and after removal (right). As you can tell, this leaves a huge bone void and significant weaking of the malleoli.

A. Tibial tray seated and use of lollipop trial sizer. B. Final implantation C. 1st week postop. Minimal swelling and drainage on dressing as a result of not using a tourniquet during surgery.

They say that the average human walks the entire circumference of the earth (24,901 miles) about 5 times during their lifetime. Assuming she lives into her 90’s, this means that the new ankle will need to take her approximately 47,022 more miles.

We are 8 weeks out and the patient is doing really well. She is transitioning to a regular shoe with the help of physical therapy. Interesting enough, she didn’t use narcotics post-operatively and just took Tylenol and Advil. The only real setback we have faced so far is a pressure wound at the back of her heel compliments of the posterior splint. Thankfully, this is healing uneventfully.

I am hopeful this new construct will last much longer and require less revisions over time. They say that the average human walks the entire circumference of the earth (24,901 miles) about 5 times during their lifetime. Assuming she lives into her 90’s, this means that the new ankle will need to take her approximately 47,022 more miles.

At the very least, I feel much more confident in her new hybrid total ankle taking her this distance when compared to the outdated, but historically important Agility total ankle. 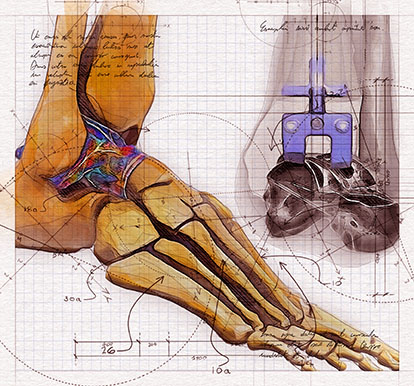